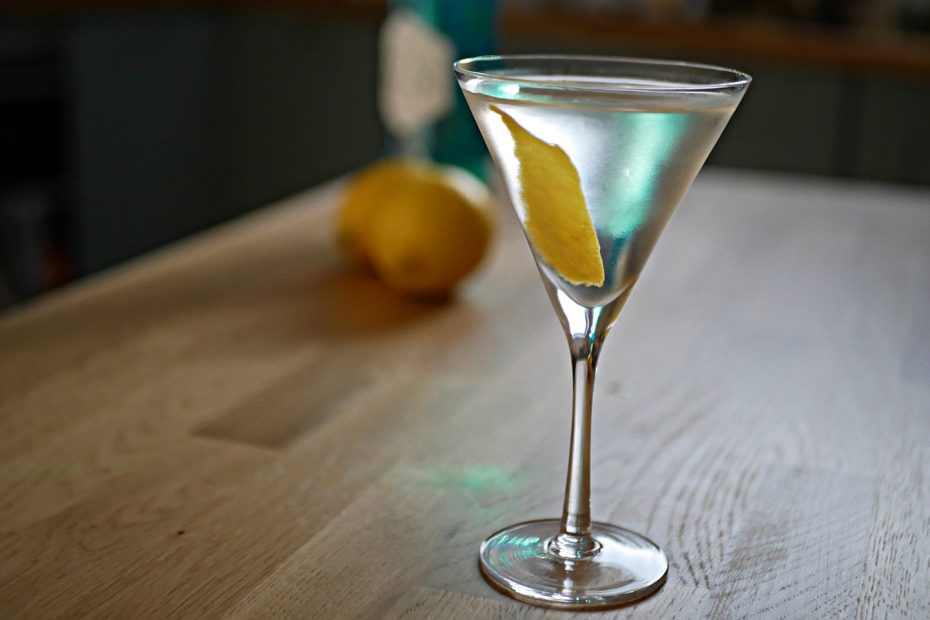 I’m not normally one for favourites, but if pushed I think a good Gin Martini would be right up there. As one of the world most famous cocktails, I don’t think I’d be the only one. Certainly I’d be in good company with James Bond.

Bartenders are always quick to dismiss Bond’s shaken not stirred line, saying that a Martini should always be stirred. Their reasoning is that a shaken Martini is too diluted and often cloudy. However I’m not shy of cloudy drinks, and I appreciate that Martini’s can be too boozy for some peoples tastes. So if you want to shake your Martini and feel like 007, then do it. Snobby bartenders be damned.

The other Martini cliche is normally some quote attributed to Churchill/Hitchcock or someone of that ilk. There are many different versions, but all rather derisory to our beloved Vermouth. You’ve probably heard ‘Pour gin and glance across the channel for the Vermouth’ or something similar. If you want to drink neat gin, then drink it. Just don’t call it a Martini.

A certain element of this is likely macho posturing, but a lot will also be down to how the Vermouth was stored. Vermouth is made up of white wine and as such it should be treated similarly. Once opened keep it in the fridge and try and drink it within a month or so. Too often people keep a half drunk bottle in a cabinet for years. With barbaric storage methods like this its no wonder people were put off Vermouth!

How dry do you like your Martini? What do we mean by dry?

Ordinarily when you see ‘dry’ in drinks it means low sugar. However when referencing a Martini its normally referring to how much Vermouth is added. If you ask for a wet Martini it will be quite heavy on the Vermouth.

One of the reasons I love a Martini is its lack of sweetness. Too often I find cocktails to be cloyingly sweet. Ordering Martini’s in the past I would love the taste that Vermouth brought, but didn’t want it excessively wet as it often brought an unwelcome sweetness. If only there was a bone dry, flavoursome Vermouth. Now there is!

Don’t feel limited to a Martini glass. You’re looking for any glass with a small capacity (certainly nothing above 180ml) and preferably a stem to stop you from warming it with your hands. When making a Martini on my own I have been known to break this last rule. Using a small Durelex glass I had no intention of the Martini lasting long enough to warm up, and it made stacking the dishwasher infinitely easier.

That being said there are three main contenders for glassware.

Start by filling your glass of choice with ice and cold water. Better yet, store it in the freezer ahead of time.

Fill a mixing glass with ice, then add:

Stir. How much you stir will depend on how big your ice cubes are, how cold the spirits are and room temperature. Some people say thirty rotations, but to be honest you really need to just check it the first time you make one.

Strain into your cocktail glass and garnish. I like to to use lemon zest, and squeeze it over the glass to ‘express’ the lemon oils over the rim. You can use an olive, but I like to reserve these for a dirty martini (one of my favourites).

If using a cocktail onion as a garnish it becomes a ‘Gibson’.